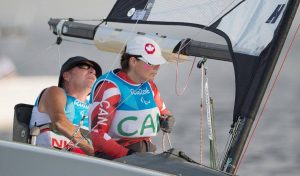 Kingston, ON – Sail Canada announced members of the 2017-18 National Sailing Team. 24 talented sailors were named to the National team this week based on the Sport Canada qualification carding criteria and overall performance during the 2016-17 season.* Members of the team branch into two squads – Performance (Top 12 World Championships/Olympic/Paralympic), and Next Gen (Development) Team.

CEO, Don Adams is pleased to see a good mix of veterans and young talent on the new National team. “The first year of the quadrennial is most often a rebuilding year for many sports with the goal of developing our Next Gen performers for 2020 and beyond”, explains Adams. “Sail Canada is currently in the process of creating and implementing a high performance athlete development system with athlete pathways producing podium results and systematic development of national team athletes with consistent medal contention. Please join me in welcoming these talented sailors to the 2017-18 Canadian Sailing Team. We are very proud of these athletes and we continue to work with our athletes to build a culture of excellence.”

In 2017 the Team is proudly supported by Volvo Car Canada, Helly Hansen and the Government of Canada. Sail Canada would like thank them and all our supporters – Sport Canada, Own the Podium, Skippers’ Plan, Rolex Canada & North Country Marine.

Congratulations to the following members of the 2017-18 National Sailing Team:

* Indicates athlete is a registered at the Canadian Sport Institute Pacific