In Memory Of Our Leader, Mentor and Friend, Dr. Gord Sleivert 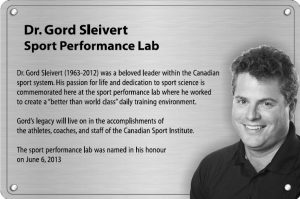 In June of 2013, three legacy initiatives were announced in Dr. Sleivert’s honour:

“Gord’s legacy will live on in the accomplishments of the athletes, coaches and staff of the Canadian Sport Institute and his colleagues from around the globe,” said Wendy Pattenden, CEO, of the Canadian Sport Institute. “The lab was one of his favourite places in the world where he worked passionately to advance sport science in Canada and help the country win more medals.”

“It is particularly fitting that all the PISE partners came together to announce legacy components in Gord’s name as he was such a contributing visionary of the PISE partnership model,” said Robert Bettauer, CEO of PISE. “It has been very important for all of us to be able to express our appreciation for Gord and what he has meant to PISE.”