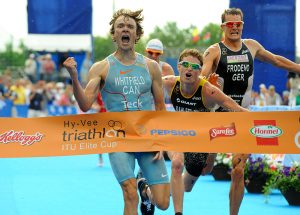 TORONTO – Canada’s Sports Hall of Fame revealed the six Athletes, one Team, and two sport “Builders” who will make up the Class of 2017. Induction into Canada’s Sports Hall of Fame is considered the country’s highest sporting honour and reinforces the incredibly successful athletic careers of the nominees. This year’s Class has broken down barriers, blazed new trails, and served as proud international ambassadors for Canadian values. Each of the inductees selected to join the Class of 2017 have fostered inspiration both on and off the field of play, using sport as a platform to build a better country for their fellow athletes and all Canadians.

In attendance, on behalf of the Government of Canada, the Honourable Carla Qualtrough, Minister of Sport and Persons with Disabilities, officially welcomed the Class of 2017. “On behalf of our government, I offer my heartfelt congratulations to all the 2017 inductees to Canada’s Sports Hall of Fame. What an amazing group of sport leaders. Thank you for the contributions you have made to sport and for helping build strong, inclusive and active communities for all Canadians, especially our young people.”

“We are thrilled to announce the Class of 2017 – a class that features Canada’s greatest Indigenous, National, Olympic and Paralympic sport heroes who will inspire Canadians in sport and life. This group of people is a great reflection of Canada’s rich 150 year sporting history” said Mario Siciliano, President and CEO, Canada’s Sports Hall of Fame.

The distinguished Class of 2017 inductees includes:

A four-time Olympian, twelve-time World Champion, ten-time National Champion, and Canadian Sport Institute Pacific alumni, Simon Whitfield is one of Canada’s most accomplished and decorated athletes.  Simon entered his first triathlon at the age of 12 at Sharbot Lake, Ontario, and predicted his own destiny when he told his hometown newspaper that his goal was to win an Olympic Gold medal in triathlon.

In 1999, Simon earned a Bronze medal at the Pan American Games. He later became one of only a few athletes in the world to have competed in four Olympic triathlons since the sport made its Olympic Games debut at the 2000 Olympic Games in Sydney where Simon would go on to achieve his lifelong dream and win the Gold medal. He followed up with a Gold Medal at the 2002 Commonwealth Games and went on to inspire the nation at the 2008 Olympic Games in Beijing where he won the Silver medal.

Simon’s accomplishments as a triathlete and as an ambassador to the sport have left an enormous impact on the triathlon community. Simon takes his role as triathlon’s ambassador to Canada and to the world very seriously. He has continued to inspire and challenge all those around him to work hard, drive toward excellence, and most importantly, live an active and healthy lifestyle.

Simon supports many charities and loves being able to mentor youth to find their passion.  Simon has committed his time to numerous organizations that have a mission to inspire athletes to follow their dreams or live healthy, active lives. Simon’s stellar athletic abilities have inspired young people around the globe. He still spends his time visiting schools to encourage young people to not be afraid of failing and to follow their dreams. Simon’s message is that the simple pursuit of excellence is its own reward and that although not everyone can be an Olympian, performing to the best of one’s ability is the reward, not the outcome.

The Class of 2017 will be officially inducted during the Canada’s Sports Hall of Fame 2017 Induction Celebrations on November 9, 2017 at the Metro Toronto Convention Centre. Please visit sportshall.ca for more information.

With Files From Canada’s Sports Hall of Fame