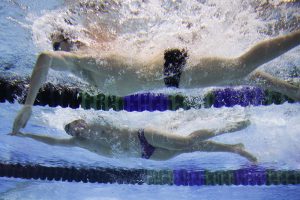 Victoria, BC – In addition to the announcement of the senior national team for the FINA World Championships Sunday, Swimming Canada also announced national teams for two other important development meets.

A total of 24 swimmers (10 men, 14 women) will represent Canada at the FISU Universiade in Taipei. Many top athletes have competed at these world university games in past years. For example, in 2015 backstroker Kylie Masse emerged with a gold medal at the Universiade, and one year later became an Olympic medallist. The event takes place from Aug. 19-30, with swimming scheduled for Aug. 20-27.

Meanwhile, Canada will be sending a strong contingent to the FINA World Junior Swimming Championships in Indianapolis. Canada’s 14-member team will include quadruple Olympic medallist Penny Oleksiak, double Olympic medallist Taylor Ruck, and senior worlds team members Kayla Sanchez and Rebecca Smith. With the championships set for Aug. 23-28, it will be a quick turnaround for the members of the team returning from senior worlds, which end July 30 in Budapest, Hungary.

Canada won 12 medals at the 2015 edition of the world juniors, with Ruck winning gold in the 100-m and 200-m freestyle, while Oleksiak took silver in the 50-m and 100-m butterfly and 100-m freestyle. Oleksiak, Ruck, and Smith were also part of three relay medals, including gold and a world junior record in the mixed 4×100-m free relay.