RBC Training Ground Returns to BC with Five Local Qualifiers 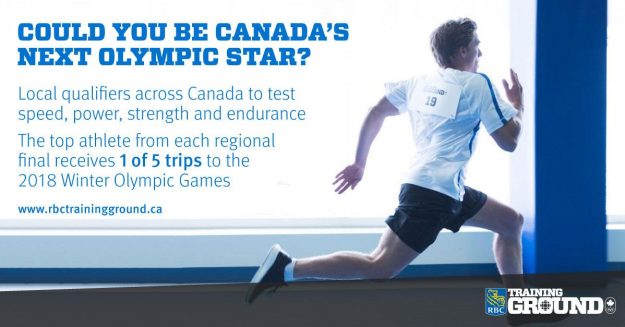 The search begins on February 15 in Langley.

VANCOUVER – Five RBC Training Ground local qualifiers are set to take place across British Columbia in 2017, in the hopes of finding Canada’s next great Olympic athletes.

RBC Training Ground is a program designed to help sport officials uncover athletes with Olympic podium potential, in sports they may not have considered. Athletes between the ages of 14 and 25 will execute a series of workouts measuring speed, power, strength, and endurance in front of coaches and officials from National Sport Organizations (NSOs). The participants’ results will be measured against performance benchmarks to determine an athlete’s capacity for sport at its highest level.

The 100 best performers from across the province will be invited to the RBC Training Ground regional final at the CSI Pacific campus at the Richmond Olympic Oval on March 4. The best of the best may receive financial support towards their training and competition programs for up to three years. The standout performer at the BC regional final will be awarded a trip to the 2018 Winter Olympic Games in Pyeongchang, South Korea.

“RBC Training Ground offers athletes an opportunity to be tested across four fun and challenging fitness stations. The best part is that it is a national program, and you will be compared against athletes all across Canada in these tests,” said CSI Pacific Talent Development Director Kurt Innes. “This is a really awesome program that will hopefully mobilize all athletes across our province to step up and see how well they can perform in each of these tests.”

RBC Training Ground began in 2016 with 400 athletes participating in four athletic combines across the country. Ninety-four athletes met the testing benchmarks set by NSOs, including 25 athletes who were selected to receive funding and support through RBC and the Canadian Olympic Foundation.

Registration for the local qualifiers in Langley and Prince George can be found at www.podiumsearch.ca. Registration for events in Burnaby, Kamloops, and Victoria is available at www.rbctrainingground.com.