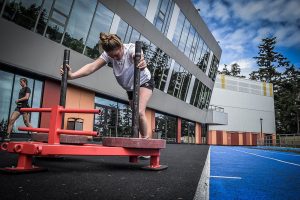 Victoria, BC – The Canadian Sport Institute Pacific’s sport science experts will ply their skills locally this weekend while supporting Canada’s women’s rugby sevens team, who are playing their first games on home soil since winning bronze at the 2016 Summer Olympics in Rio.

The HSBC Canada Women’s Sevens tournament returns to Langford, BC for the third consecutive year this Saturday and Sunday, May 27-28. The competition will feature 33 games played by 12 different countries with over 100 Olympians hitting the pitch at Westhills Stadium.

Canadian Sport Institute Pacific staff members work closely with Rugby Canada throughout the year and will be in full force this weekend as the women’s rugby sevens squad goes for their highest-ever finish in their home event. The women’s sevens team has centralized out of Canadian Sport Institute Pacific’s Victoria campus at PISE since 2011, where they have access to the Institute’s Game Plan, Health Services, Mental Performance, Performance Analysis, Physiology, Sport Nutrition, Strength & Conditioning teams and other training needs.

“Both of Canada’s men’s and women’s rugby sevens programs have had incredible seasons on the world sevens circuits. This is an excellent opportunity for Canadians to see the top women’s rugby sevens teams in the world here at home and cheer Canada to victory,” said Canadian Sport Institute Pacific CEO Wendy Pattenden. “Everyone at the Canadian Sport Institute Pacific is extremely excited for this weekend’s action and to support our own staff working with Rugby Canada.”

The Canadian women come into the tournament sitting third in the HSBC Women’s World Rugby Sevens Series and are only 12 points back of first place. They are also two points away from claiming second with two tournaments remaining. The squad has won three medals during the 2016-17 series, including gold at the Sydney Sevens.

With limited tickets remaining, Canada Sevens organizers are strongly encouraging the public to purchase their tickets now by visiting www.canadasevens.com.