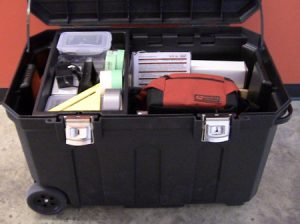 The Field Testing Kits provide the necessary tools for coaches to assess the physiological parameters of their athletes using common field tests. These kits are equipped to do a general battery of tests to assess leg power, speed, agility, muscular endurance, and aerobic power. In order to access the kits coaches must complete an Field Testing Kit orientation workshop or be registered in the Advanced Coaching Diploma program. Please contact your regional Athlete Coach Services Coordinator to inquire about Field Testing Kits in your region.

Listed below are some of the tests you can perform with the kit:

See which Field Testing Equipment is available in your region [PDF]. Note, while not all items are available in each of our eight centres, we may be able to transport certain pieces to coaches across BC upon request. Please contact your regional Athlete Coach Services team member to inquire.

The FMS is a ranking and grading system that documents movement patterns that are key to normal function. By screening these patterns, the FMS identifies functional limitations and asymmetries. These are issues that can reduce the effects of functional training and physical conditioning and distort body awareness.

The FMS generates the Functional Movement Screen Score, which is used to target problems and track progress. This scoring system is directly linked to the most beneficial corrective exercises to restore mechanically sound movement patterns.

In addition to the equipment necessary for testing, a DVD is provided to show you a Functional Movement Screening and Corrective Exercise System that is designed to identify and attack limiting factors, allowing athletes to realize their potential.